Why Does Watt Density Always Come Up When Discussing Heating Elements?

Watt density is a useful measure when considering the various types of heating elements available. TUTCO-Farnam Custom Products manufactures open coil heating elements which are generally used to heat a gas flow, such as air or nitrogen. We are also manufacturers of surface heaters that heat by conduction. This discussion will pertain specifically to watt density and open coil elements.

What is watt density?

Watt density is defined as the heating element power divided by the actively heated surface area of the element. If you were to pick up a heat transfer textbook, power/surface area is identified as the heat flux, but the term watt density has found common usage within the industry. In the United States, the units commonly used are [Watts]/[inches]². In other countries, [Watts]/[mm]² is often seen.

Below is a mental picture I use when thinking about watt density. For a given area, a higher watt density will be more “dense” with wattage. 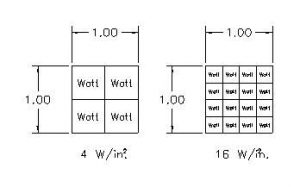 Why is watt density useful?

Watt density is a useful measure for predicting relative heating element temperature when comparing different alternatives. The operating temperature of the element is an important consideration for heat transfer efficiency and life.

There are three modes of heat transfer, conduction, convection, and radiation. TUTCO-Farnam Custom Products’ open coil elements heat the air stream via forced convection. Forced convection takes place when a gas flow passes over a surface with a temperature different than the gas flow. The fundamental equation for convection heat transfer is Newton’s Law of Cooling.

However, with this equation, we can still derive some good information with a minimum of effort. For example, I am a design engineer tasked with revising a product that uses a heater/blower combination. The existing product has a 100 CFM blower, and a 500W 120V CB heater with a watt density of 30 Watt/ in.². Marketing has determined that our company can gain more market share if a 1000W heater is used like their competitor’s. A 1000W 120V CB heater has a watt density of 45 Watt/ in.². I want to keep the same blower if at all possible. With the same blower, I can assume the air velocity is essentially the same, and therefore, (h) is the same for both cases. I also know that Tair the inlet air is room temperature whether I’m using a 500W or 1000W element. Knowing that I can instantly infer the 1000W element wire surface temperature, Tsurface, will operate at a higher temperature.

We can take this a step further with a minimum of math and information to estimate, “How much hotter?”. I don’t know what the coil surface temperature, Tsurface, of the existing 500W is. But if I take an educated guess, I can still estimate and get a feel for how much hotter the 1000W element will operate. I’m guessing the coil temperature, Tsur1, is somewhere between 600°F and 1000°F.

Since Tair is generally small relative to Tsurface, it becomes apparent an initial estimate in temperature increase can be had simply from the ratio of watt densities.

Check out some of our innovative open coil heater designs or tell us about your project.

« How Much Wattage Do I Need? » What is CA Proposition 65?
Calculators