Understanding Power and the 3 Phases

Delta and Wye are a common point of misunderstanding and cause for confusion when understanding and calculating how 3-phase power is used. It is important to understand the difference between the two when they are used with respect to heater design. The three phases of power are created at power plants, such as hydroelectric, nuclear, or coal, where power is generated. The power plant’s turbine generators which create the electricity have three separate coils that align with the generator poles to create the three different phases. As the generator armature makes its way around the 360° circle it causes three AC waves that are 120° out of phase with each other. In the United States of America, it is common for the AC electricity to change directions 60 times per second hence the 60 Hz we see on data plate labels and for electrical components. As electricity is transmitted, it is stepped down via a transformer to a usable amplitude, such as 120V, 240V, 480V, etc. 3-Phase power would use all three distribution lines whereas single-phase power could use only one (like 120V L1-N) or two distribution lines (like 240V L1-L2).

Each Type of Wiring Configuration (Delta and Wye) Has Unique Benefits. Hopefully, this gives you a better understanding of the two types of configurations and how we use them in our heaters to produce the optimal heater design.

If you want more information and some infographics, please download and take a look at the Making Sense of Delta & Wye PowerPoint. 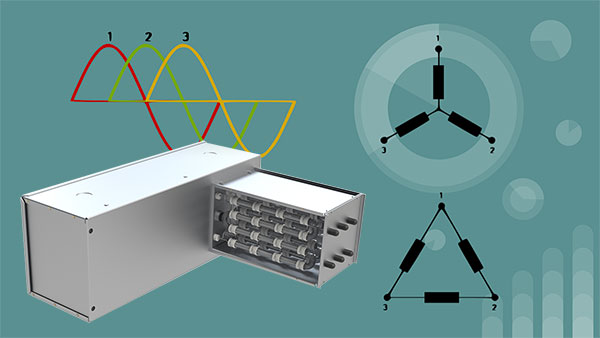 A Delta configuration is a circuit in which three loads are connected in a triangle with each load representing a side of the triangle.

A Wye configuration is a circuit in which three loads are connected in a Y with each leg representing a leg of the Y.